The Gastrointestinal Microbial Assay Plus (GI MAP) tests for H. pylori using quantitative PCR. The assay is extremely sensitive, detecting H. pylori at as little as 10 organisms per gram of stool. Because the organism is quantified, the test can report the concentration of H. pylori instead of simply a “positive” or a “negative” result. The laboratory has set the reference range as < 1e3 (1000) organisms per gram of stool. Below this level, however, it is still possible for H. pylori to be problematic. This case will review some of the criteria used to determine clinical significance below the reference range.

Low-Level H. pylori: To Treat or Not to Treat

Virulence factors are genes that may be found within the genome of H. pylori. These genes are related to higher incidence of pathology such as gastric or duodenal ulcers and, rarely, gastric carcinoma. If these genes are present, H. pylori will be significant for treatment regardless of level. More information on virulence factors can be found in the GI MAP White Paper.

When assessing a case of low-level H. pylori, upper GI symptoms such as gastritis and reflux should be considered. The presence of these symptoms may indicate significant H. pylori infection, even in the context of low-level stool H. pylori.

To adapt to the low pH of the stomach, H. pylori can produce urease which neutralizes the acid. If concentration of H. pylori is high enough, this may significantly affect gastric acidity, resulting in hypochlorhydria. This can contribute to significant effects such as lower esophageal sphincter dysfunction, digestive insufficiency, dysbiosis, and nutrient malabsorption.

Findings to look for on the GI MAP include widespread dysbiosis and low elastase-1.

If H. pylori is detected despite history of herbal or antibiotic treatment, this is incredibly significant. Current treatment plan should be adjusted to include agents to modify treatment resistance.

AS, a 36-year-old female of South Asian descent, presented in office with a 6-month history of severe upper abdominal pain accompanied by constipation and bloating. She also reported fatigue, hair loss and severe premenstrual mood changes, heavy, painful menses with clotting. AS presented with GI workup, including full colonoscopy. She had not had an upper endoscopy. On questioning, she revealed that she had a history of positive H. pylori, which was treated with two rounds of antibiotics. Protocols were unknown.

To rule out causes of fatigue and hair loss:

To assess gastrointestinal health and rule out H pylori:

Findings from the Serum Testing

Assessment of the GI MAP

The test is negative for pathogens, fungi/yeast, viruses and opportunistic parasites.

H. pylori is detected at 9.3e2 (930 organisms) and is negative for virulence factors.

The normal flora show two anomalies: Clostridia class and Akkermansia muciniphila, which are both deficient. Deficient clostridia can be associated with inflammation and auto-immunity. Akkermansia muciniphila is a mucus-loving organism that thrives in a healthy gut terrain. Deficient Akkermansi can often signal a compromised gut lining or intestinal permeability. Both findings correlate well with clinical history in this case.

Methanobacteriaceae, Prevotella spp. and Fusobacterium spp. are expected findings on the GI MAP. The levels found here are unremarkable. 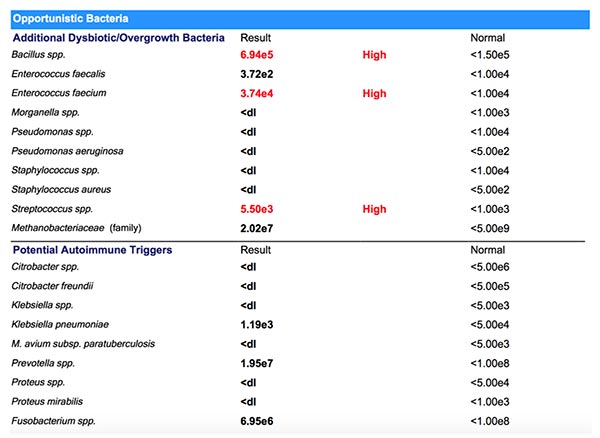 Steatocrit is normal, while elastase-1 is deficient. Low elastase is a common finding secondary to significant H. pylori infection.

Secretory IgA is low, which can be multifactorial. In this case nutrient deficiency, reduced mucosal health and chronic stress are likely to be be contributing to low Secretory IgA.

Calprotectin is within range, but higher than the functional range of < 50ug/g. This value is likely to be attributed to the dysbiosis and immune dysregulation in this case.

After careful review of the GI MAP and clinical history, the H pylori was determined to be significant for treatment based on the following criteria:

NOTICE: Information provided by Diagnostic Solutions Laboratory does not constitute medical advice; but is for educational purposes only.

After one week, constipation had completely resolved. Upper abdominal pain and bloating remained but had decreased in frequency and intensity.

At two month follow up, patient reported diminished hormonal symptoms. Mood was reported as more balanced throughout the month, with one to two days of decreased mood before menses. Menses was lighter and clotting was rare.

Six weeks post-treatment, a standalone H. pylori Panel will be run to determine success of treatment. The next round of treatment will be based on this test result.

The decision to treat low-level H. pylori requires careful consideration of multiple factors. Clinical history and test results should be analyzed to determine whether detected H. pylori will be significant for treatment. If H. pylori is deemed significant, botanical preparations may be very safe and effective options for the treatment of low-level H. pylori and may be a reasonable substitute for antibiotic therapy. 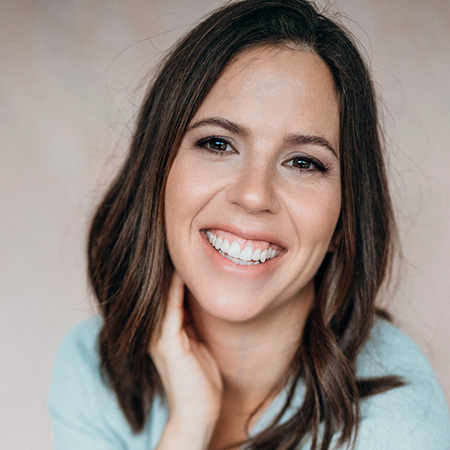 Dr. Amy Rolfsen is a naturopathic doctor and medical consultant. Her areas of clinical interest and expertise are; women’s wellness, children’s health, immunology and gastrointestinal health. Dr. Rolfsen is continually working on mastering her craft. She is drawn to gentle, non-invasive techniques and will incorporate a combination of nutrition, botanicals, Chinese medicine, manual therapies, energetic therapies and pharmaceuticals, tailoring treatment plans to each individual.

Dr. Rolfsen runs her own clinic where she sees patients in-person and also consults with international clients. She works with people who are seeking guidance in understanding their health and taking steps toward perfecting their physical, mental and emotional health.